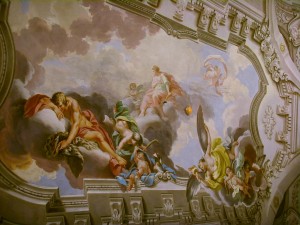 In Greek mythology, Endymion (/ɛnˈdɪmiən/; Ancient Greek: Ἐνδυμίων, gen.: Ἐνδυμίωνος), was variously a handsome Aeolian[citation needed] shepherd, hunter, or king who was said to rule and live at Olympia in Elis, and he was also venerated and said to reside on Mount Latmus in Caria, on the west coast of Asia Minor.

There is confusion over the correct location of Endymion, as some sources suppose that one was, or was related to, the prince of Elis, and the other was a shepherd from Caria— or, a later suggestion, an astronomer: Pliny the Elder mentions Endymion as the first human to observe the movements of the moon, which (according to Pliny) accounts for Endymion’s love. As such, there have been two attributed sites of Endymion’s burial: the citizens of Heracleia ad Latmo claimed that Endymion’s tomb was on Mount Latmus, while the Eleans declared that it was at Olympia.

However, the role of lover of Selene, the moon, is attributed primarily to Endymion who was either a shepherd or an astronomer, either profession providing justification for him to spend time beneath the moon.

Apollonius of Rhodes is one of the many poets who tell how Selene, the Titan goddess of the moon,[8] loved the mortal. She believed him to be so beautiful that she asked Endymion’s father, Zeus, to grant him eternal youth so that he would never leave her. Alternatively, Selene so loved how Endymion looked when he was asleep in the cave on Mount Latmus, near Miletus in Caria,[9] that she entreated Zeus that he might remain that way. In either case, Zeus granted her wish and put him into an eternal sleep. Every night, Selene visited him where he slept. Selene and Endymion had fifty daughters who are equated by some scholars with the fifty months of the Olympiad.[10]

According to a passage in Deipnosophistae, the sophist and dithyrambic poet Licymnius of Chios[11] tells a different tale, in which Hypnos, the god of sleep, in awe of his beauty, causes him to sleep with his eyes open, so he can fully admire his face.

Calyce and Aethlius had a son Endymion who led Aeolians from Thessaly and founded Elis. But some say that he was a son of Zeus. As he was of unsurpassed beauty, the Moon fell in love with him, and Zeus allowed him to choose what he would, and he chose to sleep for ever, remaining deathless and ageless. Endymion had by a Naiad nymph or, as some say, by Iphianassa, a son Aetolus, who slew Apis, son of Phoroneus, and fled to the Curetian country. There he killed his hosts, Dorus and Laodocus and Polypoetes, the sons of Phthia and Apollo, and called the country Aetolia after himself.
According to Pausanias, Endymion deposed Clymenus, son of Cardys, at Olympia. Describing the “early history” of the Eleans, Pausanias reports that:

The first to rule in this land, they say, was Aethlius, who was the son of Zeus and of Protogeneia, the daughter of Deucalion, and the father of Endymion. The Moon, they say, fell in love with this Endymion and bore him fifty daughters. Others with greater probability say that Endymion took a wife Asterodia—others say she was Chromia, the daughter of Itonus, the son of Amphictyon; others again, Hyperippe, the daughter of Arcas — but all agree that Endymion begat Paeon, Epeius, Aetolus, and also a daughter Eurycyda. Endymion set his sons to run a race at Olympia for the throne; Epeius won, and obtained the kingdom, and his subjects were then named Epeans for the first time. Of his brothers they say that Aetolus remained at home, while Paeon, vexed at his defeat, went into the farthest exile possible, and that the region beyond the river Axius was named after him Paeonia. As to the death of Endymion, the people of Heracleia near Miletus do not agree with the Eleans for while the Eleans show a tomb of Endymion, the folk of Heracleia say that he retired to Mount Latmus and give him honor, there being a shrine of Endymion on Latmus.
Pausanias also reports seeing a statue of Endymion in the treasury of Metapontines at Olympia.

Propertius (Book 2, el. 15), Cicero’s Tusculanae Quaestiones (Book 1), and Theocritus discuss the Endymion myth to some length, but reiterate the above to varying degrees. The myth surrounding Endymion has been expanded and reworked during the modern period by figures like Henry Wadsworth Longfellow and John Keats in his 1818 narrative poem Endymion.